In 1978 comedians Cheech Marin and Tommy Chong starred in a so-called “stoner” comedy film titled “Up in Smoke”.  The 2019 version of the movie could very well refer to money lost in the parabolic rise and subsequent fall of cannabis stocks.

The growing acceptance of cannabis for pharmaceutical and other purposes took the investment world by storm, as investors raced to cash in on the “green rush”.  Yet, as with almost every investment bubble since the Dutch Tulip Bulb mania of the early 1600s, it seems as though the cannabis bubble has burst—at least for now.

The North American Marijuana Index is an equally-weighted index that tracks the stocks of leading companies in the legal cannabis industry in the U.S. and Canada.  The index’s inception was January 2nd, 2015 with a starting value of 100 points.  After hitting a high of 358.93 in January of 2018, the index has been up and down, with the most recent move a steep collapse down to 111.18.  This 70% plunge would no doubt cause Cheech and Chong to say in amazement “Oh wow, man!” 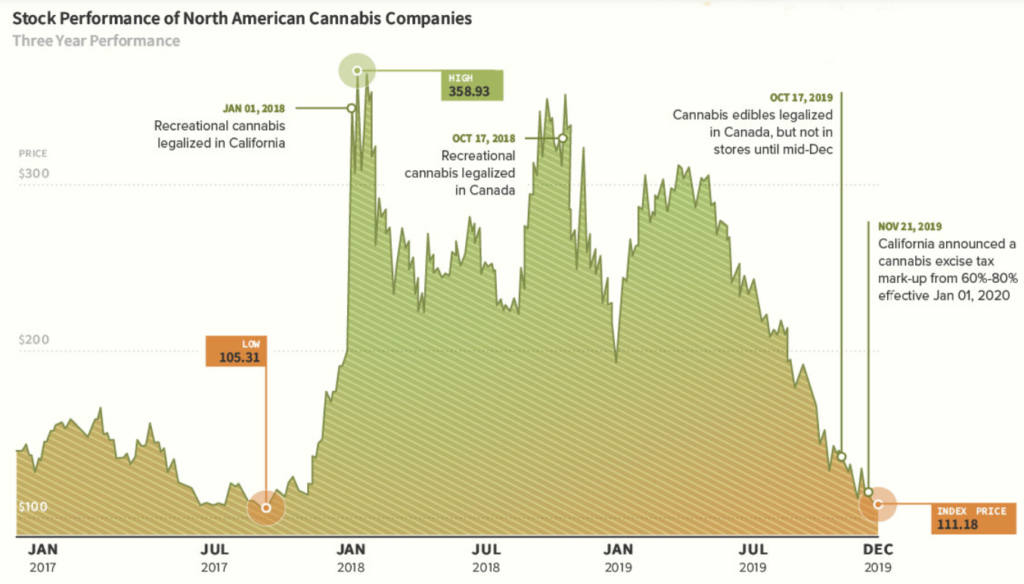 For the attorneys: “This is for informational purposes only, and should not be construed or acted upon as individualized investment advice to invest in Marijuana stocks”