The 1927 Yankees batting order was famously dubbed “murderers row” due to their lineup stacked with Hall of Famers like Babe Ruth, Lou Gehrig, and Earl Combs.  According to Bank of America strategist Michael Hartnett, today’s murderers row is made up of the global central bankers Jerome Powell of the U.S. Federal Reserve, Mario Draghi at the European Central Bank, and Haruhiko Kuroda at the Bank of Japan.

In a research note, Hartnett stated coordinated central bank action has reinvigorated the “everything rally” and that fund flow data shows both bond and equity funds saw inflows.  While he notes “investors are all in on the bond bubble”, he believes that stance is misguided and spells trouble.  He offered what he calls “the most important chart in the world”, which he suggests indicates the bond bubble is about to burst as the yield on the 10-year U.S. Treasury note has consistently failed to remain below 1.5%.

Indeed, bond yields bounced once again off the 1.5% level and rallied the most in a single week since autumn of 2016 (+30% – 9/3/19 to 9/16/19), causing sizeable losses in the interest-rate-sensitive sectors of utilities and real estate, and equally sizeable gains in financials and some other “value” sectors. 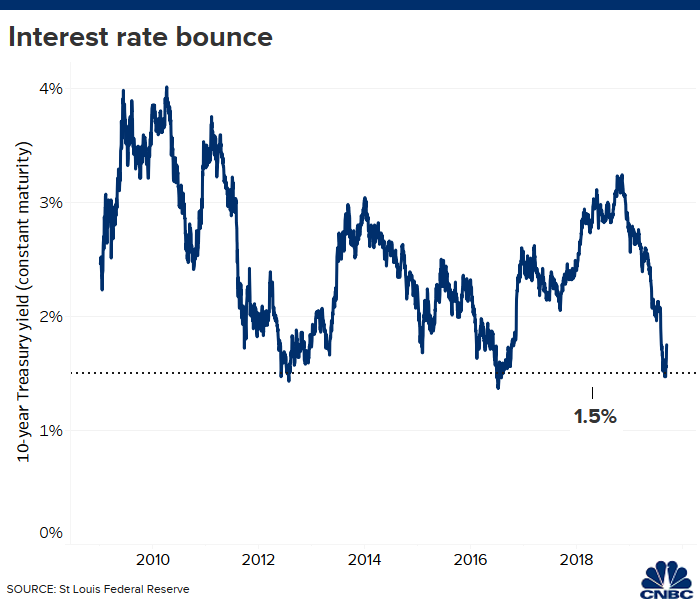 Is your surplus positioned for this type of volatility? At maturities, will you be investing at higher or lower rates? If you need some help, give us a call…