An Inside at the NCAA Men’s Basketball Final Four Crew 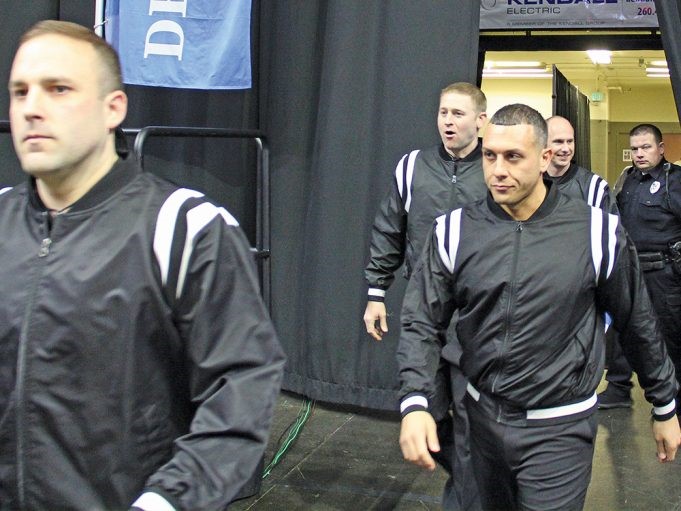 As a winter bomb cyclone slammed Denver on March 13, Matt Palumb was home in Syracuse, N.Y., with two things on his mind: the NCAA Division III men’s college basketball championship and a D-I top-five matchup in men’s lacrosse between the University of Denver and Ohio State. Little did he know, the two games would intersect and affect one of the biggest weekends of his life.

Palumb flew into Fort Wayne, Ind., on Thursday, March 14, not knowing how his weekend would turn out. He was selected as one of the officials to work the D-III Final Four, either the semis Friday night or the championship Saturday night. But he also wanted to officiate the elite lacrosse game Saturday in Columbus, Ohio.

Jim Haney, the NCAA D-III men’s basketball national coordinator of officials. was sympathetic. “We gave him the option to work Friday night in the semis.”

Fate would make the decision.

“It would have been good to work Friday night, then head over Saturday to Columbus for the lacrosse game,” Palumb said, “but due to the storm, the lacrosse game got canceled because the Denver team couldn’t get a flight out.” The flexibility offered by Haney demonstrates the nature of how D-III athletics funnels down to officiating, offering opportunities and working with the officials to develop their careers while balancing other life issues.

It’s the big time. It’s just not on TV. The games have the intensity you’d expect in a Duke-North Carolina matchup, but the players are not as big or tall, and the crowds a bit smaller. That doesn’t stop the coaches, players or officials from enjoying reaching the Final Four, a goal regardless of whether it’s D-I, D-II or D-III.

The officials selected to work the D-III Final Four arrived in Fort Wayne by car and plane the afternoon of March 14, were greeted by Haney, and then given the weekend’s itinerary. First stop after catching some zzzzz’s or handling remote work from their hotel room was a Thursday night social to meet their fellow officials, and then hear an opening prep from Haney.

King is used to long travels. He also officiates D-II, and that takes him to Alaska and Canada, along with lengthy drives through Washington, Oregon and Idaho. “The conference pays for flights when you go to the schools farther away,” he said.

Haney opened the Thursday evening preparation session with the 10 officials, congratulating them on representing the class of 2019 and cautioning them, “Be careful who you associate with while you’re here. Be careful on social media. It can come back to haunt you at the worst possible time.”

There is a skybox dedicated just for officials in the Fort Wayne arena. When not on the court, it serves as their home away from home, designed to keep them away from any fans or outside interactions. With 12 cushioned seats, the suite “is for us, no friends, no family,” Haney said. “You’re representing all of us,” he said of the dress code.

“Postgame is back here,” Haney said of the prep room in the Holiday Inn Express across the street from the Allen County War Memorial Coliseum. “When it’s time to work, we’ll work. When it’s time to play, we’ll play. We want this to be about the experience, not just about work. We want you to enjoy the experience from start to finish and be ambassadors for the 2020 class of officials, telling them how great it was.”

Supervisors and observers also play a big role in the process. League supervisors must be on board with where officiating is headed in D-III as a whole, both when it comes to rules enforcement and helping officials improve.

The first crew grabbed a shuttle Friday at 4:15 p.m. for the 6 p.m. tipoff. Haney wanted the crews there an hour-and-a-half before game time. He went through logistics on the national anthem, timing and where the teams will stand.

There would be two-minute timeouts, and Haney told the officials to use that time wisely. With the ability to go to the TV monitor, he explained that when ruling on the restricted arc on a block to make sure to point to the arc for emphasis, “so you can go to the monitor.” He reminded Linder that part of his task as the alternate for all three games was to monitor this.

Six key areas were covered by Haney as he prepared his crews for Friday night.

Focus on four minutes at a time. Control each four-minute segment. Adjust. Timeouts will be two minutes, so you’ll have time to talk then.

Call the rules as written. Use the videos created by J.D. Collins, the NCAA national coordinator of D-I men’s basketball of officiating, as a guide on what to call. “You’ve done this all year long,” Haney said. “We will decide how they play, they will adjust. I don’t want to see anything different from how you’ve been calling it throughout the season. They know what’s coming.”

Trouble spots. “We will have post play,” he continued. “Don’t allow the defense to use physicality to their advantage. Pick it up early. Call the first foul, whether that’s on the offensive player warding off or the defender holding. Incorrect calls are when we’re not getting the first foul.”

Screens and cutters. The guards tend to run their defender through screeners. Pay attention to the screen and its legality and what the defenders are doing to the cutters. “If he’s knocking him off his path, it’s a foul,” Haney said. “If the defender runs through the screener, it’s a foul.”

Rebounding. The trail and center must be involved and step down. Watch the second lane space during free throws for the player pushing down. Get wide.

“Do your third. If everyone does their third, the games will go well,” Haney encouraged the crews. “Most importantly, remember you are under the microscope. Have fun. It’s OK to smile. You deserve to be here. Be proud of your effort. I’ll be proud of you. You may never have this opportunity again. I never did. I’m living it through you guys. Be ambassadors for next year.”

Just a few days earlier, Bowen, Washer and King had officiated the NAIA D-II championship game in Sioux Falls, S.D. From there, it was quickly head home, then off to Fort Wayne. “It’s been a whirlwind. You don’t expect the opportunity, and to get both so close together has been amazing,” Bowen said.

At Sioux Falls, the officials got great support from staff similar to the D-III experience. “We were told just to go out and officiate, and that’s what we got here, too. We got to enjoy a couple of cold ones afterwards and get to enjoy the experience,” he said.

At both locations, Bowen and the other officials must meet, get to know each other and then work games with new officials. It’s a challenge. “This time of year, I call it developing blind trust,” Bowen said. “You may know the guys or not. When you step on the court, they’re my brothers. The NAIA was run and gun. The D-III is also a running game, but they run more of their own set plays.”

After his semifinal, won by Swarthmore over Christopher Newport, 70-63, Bowen said the first four minutes of the game were critical. “It’s so important,” he said. “Seeing whether the teams are in a zone or playing man. Do they run and gun? Do they shoot in the first five seconds they get to the frontcourt?

“We need to be the helpers in the game, figure out how the teams will play and adapt. At this level, you need to let the guys play as much as they can. For the tournament, our goal as officials should be doing what we can for the game and student-athletes. Be fair and don’t be bigger than the game.”

Players, fans and coaches should see the passion and energy from the officials at the tournament, Bowen said. “We need to be consistent, fair and show we care about the game,” he said.

Washer, too, enjoyed both the Sioux Falls and Fort Wayne experiences. “It was a blast. I had two really good partners at both sites,” he said.

“The friendships are such a big part, both here and at the NAIA,” Washer said.

Both nodded their heads in agreement each stating that they’d added nine brothers in Fort Wayne (10 officials working) and 11 in Sioux Falls (12 officials worked the NAIA D-II championships).

The officials were asked to share some of the best pregame advice they’ve gotten. Here’s a sampling:

Meeks: “Be a good partner, have fun and never be bigger than the game.”

Bowen: “Just like the shirts we wear, keep it black and white.”

King: “Enjoy each game and crew. None of us know which game will be our last.”

Haney was pleased with the crews, relating stories from coaches about the improvement in officiating in the tournament the past two years. But we’ll let Wheaton men’s basketball coach Mike Schauer tell it in his words:

“This was the best officiated tourney I’ve ever been in,” he said. “It’s not even close. The system in place and the work Jim’s done have made a big difference. You see the difference in the caliber of officiating. There was great officiating in all five games we played.”

Though the officials finished up their “last” game of the NCAA D-III Final Four that Saturday night with Wisconsin-Oshkosh defeating Swarthmore, 96-82 (after Wisconsin-Oshkosh beat Wheaton on Friday night in the second semifinal, 104-85), it’s likely it won’t be the last for any of them down the road. They’ve been identified as some of the top young officials throughout the country at the D-III level, and several already have some D-I games on their schedules.

Who knows? We may see them on another Final Four years from now. If not, they’ll remember the D-III Final Four weekend, a shared experience with their brothers, and a powerful and positive event filed away in their personal memory banks.